“We are projecting to lower our expenditures by nearly half (45%) over the next five years,” said NRD General Manager, John Winkler. We plan to do this while simultaneously attempting to fund over 50 projects and programs which provide public safety like flood control and water quality,” he said.

Approval of this LRIP follows the Board of Directors September approval of a budget that will once again require no increase in the NRD property tax levy.

Each year, the NRD updates this planning document that summarizes planned District activities and includes projections of financial, personnel, and land rights needs of the District for at least the next five years.

Major programs and projects addressed in the plan include:

At its September 8th Board of Directors meeting the Papio-Missouri River Natural Resources District Board of Directors held a public hearing on its FY 2017 General Operating Budget and then voted to approve a budget that will require no increase in the NRD property tax levy.

“With our property taxpayers in mind, we continue to hold the line on tax levy increases. This is the 11th year out of the past twelve that the NRD has decreased or held steady its tax levy,” said 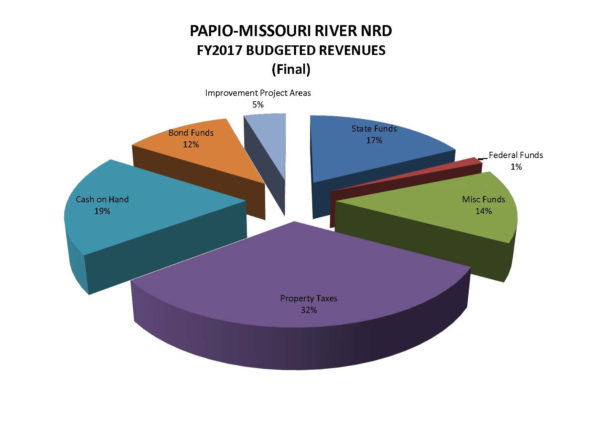 The levy is based on an estimated 3.88 percent increase in valuations across the district. The Papio-Missouri River NRD area includes all of Sarpy, Douglas, Washington and Dakota Counties plus the eastern 60% of Burt and Thurston Counties.

The NRD’s property tax levy amounts to less than two percent of the total property tax bill for residents living within the District’s six-county area. “This NRD serves more residents than any other government body, with the only exception being the State of Nebraska,” said Winkler.

The budget calls for an estimated $22.8 million in revenue from the NRD’s property tax levy. Total spending is estimated at $70.5 million. “One of the NRD’s strengths is our ability to leverage federal and state cost sharing on projects such as improvements to Missouri River levees south of Bellevue,” said Winkler. “These federal and state cost sharing efforts save local taxpayers millions of dollars,” he said