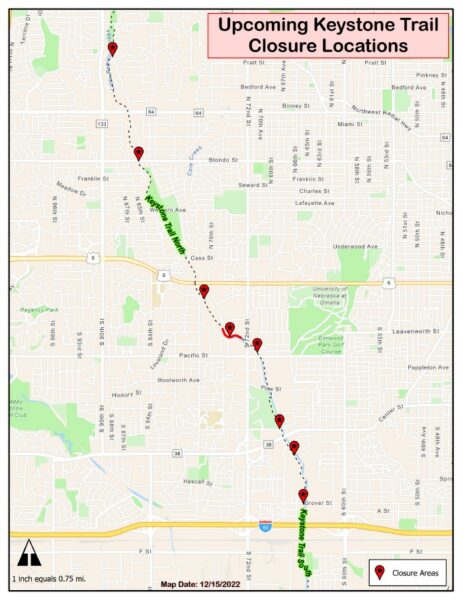 Over the next six months, segments of the Keystone Trail will be closing due to the rehabilitation of 21 stormwater pipes by the Papio NRD. These closures will occur at various times throughout the project, and most are expected to last between four to six weeks. Closings for individual locations will be provided prior to the closing (and updated in this post), but users should anticipate disruption through May 2023. The areas in which the trail will be impacted can be seen on this interactive map, a graphic here, and are listed below.

The northern portion of the Keystone Trail, between Q and Fort Streets, runs along the Little Papio Creek. Within the Little Papio Creek, there are many corrugated metal pipes that carry local stormwater into the channel that are nearing the end of their design life. As part of our duty as the local sponsor, the Papio NRD must remove and replace or rehabilitate these pipes to maintain adequate stormwater drainage throughout the City of Omaha.

The Little Papio Channel/Levee Culvert (Pipe) Project, which began in November 2022, includes the rehabilitation of 21 stormwater pipes. The Papio NRD has taken every effort to focus on rehabilitation of these pipes to minimize construction timelines and impacts to the construction areas. Regardless of the selected method of repair, trail accessibility will be impacted due to this project.

We appreciate your patience. We know how important the trail is to all its users.

For questions about this project, please contact the engineering Project Manager, Lindy Rogers, at LRogers@houstoneng.com.

The Papio-Missouri River Natural Resources District will close all access sites to the Elkhorn River for the season on the morning of November 1st. The access sites include Elkhorn Crossing Recreation Area, Graske Crossing, and West Maple Road. They will reopen April 1st. See you next season! 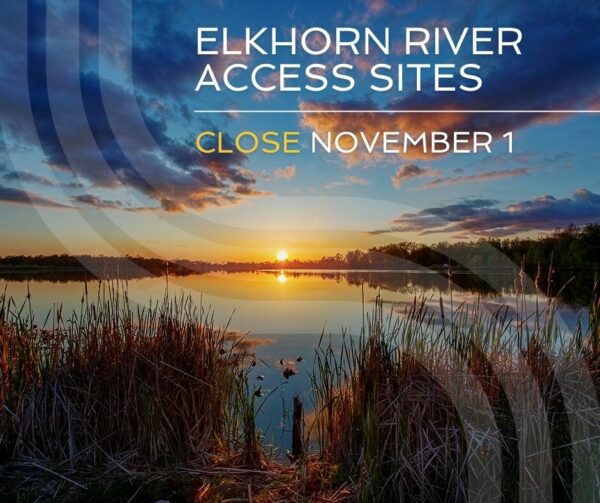 “The pedestrian bridge spans the Union Pacific Railroad tracks and East Reichmuth Road (old Hwy 275),” said Eric Williams, natural resources planner for the Papio-Missouri River Natural Resources District. “The City of Valley needed a solution to literally bridge the gaps between major parts of the community, especially a safe route that prevented kids from directly crossing the rail lines or walking on the highway overpass. The bridge and trail provide these safety measures as well as increased recreational opportunities. So, it’s a double win for Valley residents,” said Williams.

“The City of Valley is extremely excited to have the trail and bridge finally open,” said Valley Mayor Cindy Grove. “This has been a multiple year project and residents have been eagerly anticipating the opening. Being able to connect the YMCA with the school and south side of the community with a safe place for residents to walk and bike has been much needed for several years.”

Williams says the project is a great example of the power of community partnerships and one that came at no cost to Valley taxpayers. The total cost of the pedestrian bridge and trail is approximately $7 million, with a majority of the cost from federal transportation funding, and the remaining contribution from the Papio NRD.

“I am entering my ninth year as superintendent and this is a project that was in planning when I arrived,” said Dr. Melissa Poloncic, superintendent of DC West Schools. “To see this large-scale project finally come together is really a wonderful thing for our community!”

“We are so excited for the completion of the trail and the impact it will have,” said Rebecca Deterding, president and CEO of the YMCA of Greater Omaha.  “This has been highly anticipated, and we look forward to it increasing access and collaboration between the YMCA, the school and the community.”

The Papio-Missouri River Natural Resources District will open all river access sites to the Elkhorn River for the season on April 1st. 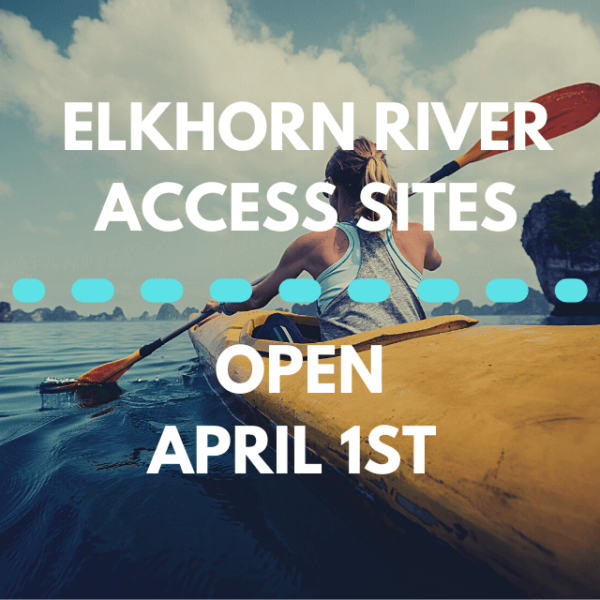 High river flows occasionally force the Papio NRD to temporarily close the river access sites for safety purposes. Park closures for Elkhorn River sites are called for when the Elkhorn River gauge at Waterloo reads a stage of 5 feet or greater. Also, river access ramps may need to be cleaned of silt, debris and safety inspected before reopening.

You can find out whether the access sites are open or closed throughout the season here:

Please see the annual letter which includes a description of each program, program guidelines, and application forms.

The deadline for applications under all programs is March 18, 2022.

Repairs to damage caused by historic flood of 2019 complete

“It’s incredible to bring together people riding bicycles, other trail users, community leaders and groups, as well as partner agencies who helped us complete extensive repairs to the Lied Bridge following the flood of 2019,” said John Winkler, general manager of the Papio NRD. “Flood damage devasted this popular pedestrian crossing and lack of access to it was certainly felt. We’re thrilled to see it back in action so quickly,” said Winkler.

For the past two years, the Papio NRD has worked closely with the Nebraska Game and Parks Commission and Lower Platte South NRD on four flood-related repair projects on the Lied Bridge and MoPac Trail.

Eric Williams, natural resources planner for the Papio NRD said the projects totaled over $525,000, a majority of which will be reimbursed by FEMA as part of disaster recovery assistance.

“It’s been a two-year project collaborating with the Papio-Missouri River NRD and the Lower Platte South NRD and we are super excited to be reopening the Lied Bridge and MoPac Trail after the devastating flood of 2019,” said Adam Johns, park superintendent III at Nebraska Game and Parks Commission. “It’s great that visitors can once again enjoy the wonderful views of the Platte River that this bridge and trail have to offer,” said Johns.

“Sometimes we don’t know what we have ‘til it’s gone,” said Lower Platte South NRD Board Chair Deborah Eagan. “Losing access to the Lied Bridge brought tremendous interest from trail users who were anxious to see it repaired and reopened. Fortunately, the damage was able to be fixed in an effective and efficient manner.  We are excited to have this important local and national link to our trail systems restored.  Thanks to all who coordinated, cooperated and communicated to see this project finalized,” said Eagan.

The Lied Platte River Bridge, a former railroad bridge, was converted to bicycle and pedestrian access in 2001. The bridge and connecting trails are critical components of the Great American Rail-Trail through Nebraska. The Great American Rail-Trail is a project of Rails-to-Trails Conservancy to create the nation’s first cross-country, multi-use trail, spanning from Washington, DC to Washington state.

“We cannot overstate the importance of having the Lied Bridge back open for bicycling,” said Julie Harris, executive director of Bike Walk Nebraska. “Not only is it a key connection for people riding locally between Omaha and Lincoln, the bridge also provides a regional connection to 120 miles of trail on the west and over 100 miles on the east, creating enormous potential for bicycle tourism in eastern Nebraska,” said Harris.

“We are absolutely thrilled to be able to share Dom’s Park with our family, friends, and community,” said Ryan and Tiffany Walters. “Seeing Dom’s Park completed, packed with children and their families, is incredible.”

Four-year-old Dom died in August 2018 after suffering a cardiac arrest while doing cannonballs off the dock with his father, Ryan. The Walters family – Ryan, Tiffany, Dom, and Nora (or Boon, as Dom called her) – frequently visited Chalco Hills Recreation Area to play on the playground equipment and explore the park.

To carry on the memory of their son, a few short months after Dom’s death, the Walters approached the Papio-Missouri River Natural Resources District (Papio NRD) about the possibility of donating funds for the construction of a new playground (Dom’s Park) at Chalco Hills. The family felt Dom’s Park would be the perfect way to honor Dom’s legacy and provide a new facility that children throughout the community could enjoy.

The Papio NRD Board of Directors agreed and voted to approve cost share for the purchase and installation of the state-of-the-art playground facility. In May, Dom’s Park replaced playground equipment that was over 30 years old.

“It has been our privilege to work with Ryan, Tiffany, and Boon and to be a partner on this special cost share project,” said Papio NRD General Manager John Winkler. “The Walters turned unimaginable tragedy into a positive. Since Dom’s Park opened, to say it’s been a tremendous hit would be an understatement. Dom’s Park is an incredible tribute to Dom and gift to the Omaha community that will last for years to come,” said Winkler.

The cost of the Dom’s Park playground equipment and installation totaled $279,071. Through generous donations to the Dominik Walters Memorial Fund, including a matching grant of $76,464 from the playground equipment company, BCI Burke Company, the Walters family donated $105,000 to the Papio NRD.

Winker says the Papio NRD budgeted $125,000 for the purchase and installation of the equipment, but the Walters family surpassed its fundraising goal, leaving $97,607 total cost for the Papio NRD.

“We owe a debt of gratitude to every person who supported us in making Dom’s Park possible, said the Walters. “Chalco Hills was one of Dominik’s favorite places and we could not imagine Dom’s Park being located anywhere else. We are grateful beyond words to the Papio NRD for believing in our vision and helping make Dom’s Park a reality,” said the Walters.

Dom’s Park is located in the northwest corner of Chalco Hills Recreation Area near Picnic Area A. 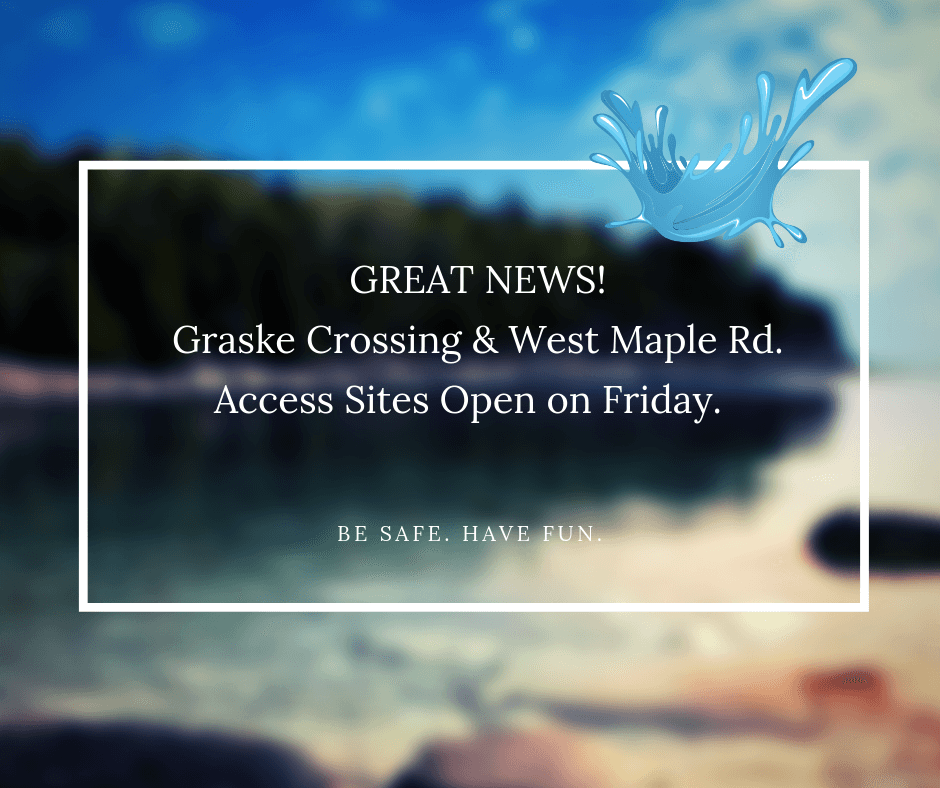 In addition, the Platte River Landing boat ramp and playground ARE OPEN.

Please be safe and wear those life jackets! 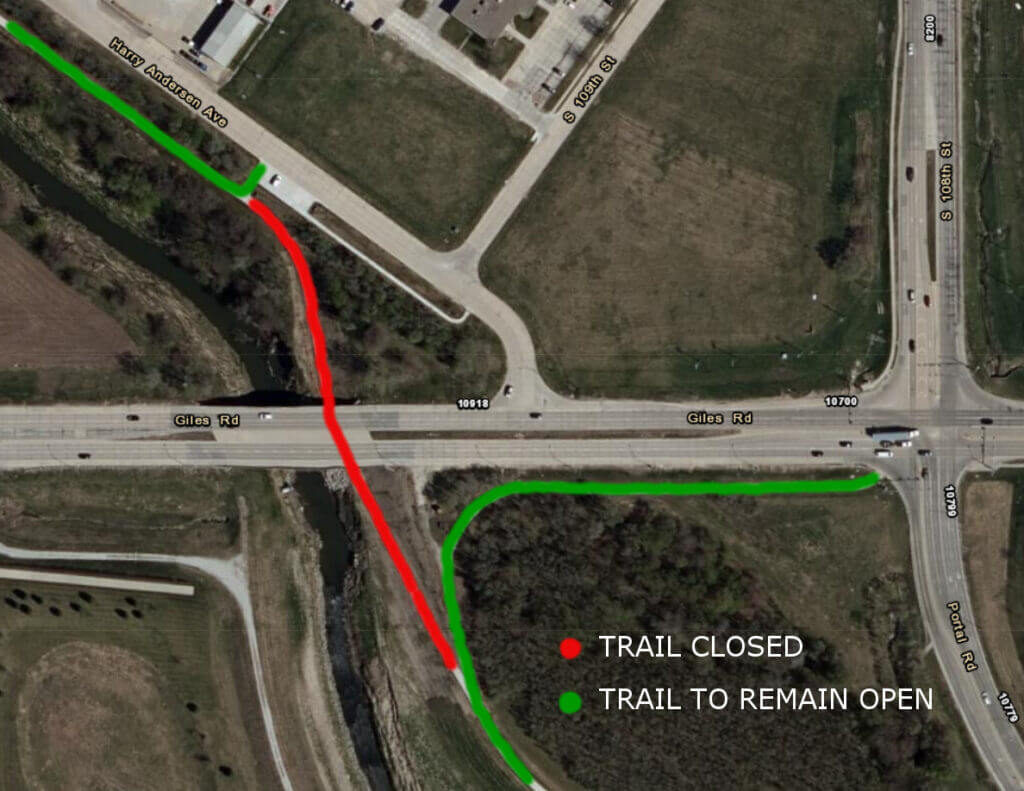 Due to a bank stabilization project, the West Papio Trail Giles Road underpass will be closed July 12 through the end of October.

While the underpass will not be accessible to trail users, the trail will remain open at the following areas:

– Connecting to the southwest corner of 108th Street and Giles Road

“Construction crews have started clearing trees,” says Eric Williams, Papio NRD Natural Resources Planner. “We want trail users to know the Papio NRD will reseed and replant along the bank to maintain the natural feel of this historic corridor.” 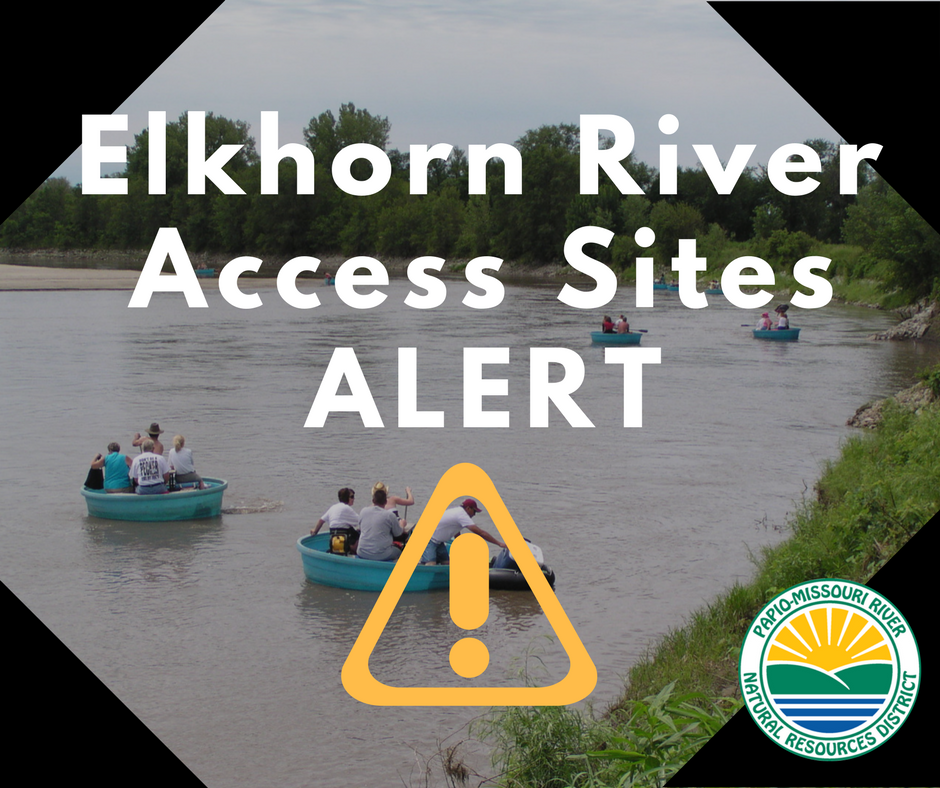