The Papio-Missouri River Natural Resources District has begun a project to reduce the sediment buildup in Pigeon Creek in Dakota County. The dredging will help lessen historical flooding of adjacent agricultural land.

Approximately 7 miles of the creek will be dredged by Natural Resources District crews.

This area received considerable flooding in June, 2014. The Pigeon Creek Levee was damaged twice during June due to record rainfall.  “Areas of Dakota County received an unheard of 28 inches of precipitation,” said NRD General Manager, John Winkler. “Work to repair the levee was done immediately. This new dredging work will greatly improve the capacity of the levees to safely convey heavy rainfall runoff,” he said. 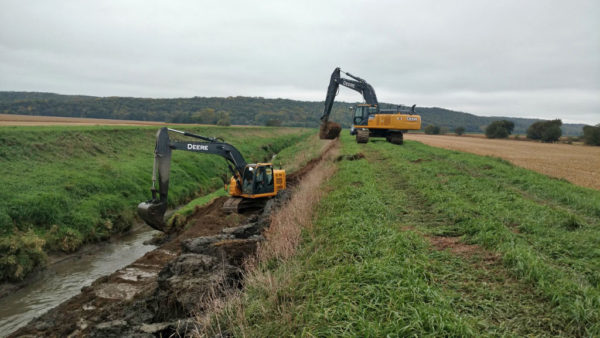 Dredging will be done from approximately Highway 77, north of Homer, upstream to the bridge at South Bluff Rd, east of Hubbard.

This project is part of the Elk/Pigeon Creek Improvement Project Area and will be paid for with Natural Resources District funding approved at the district’s September 9th Board of Directors meeting in Dakota City. A motion from Subdistrict 1 director Bill Rhea  to add an additional $142, 322 to the FY 2017 budget for the work was approved by the Board. The total budgeted by the NRD for this project is $199,500.

Dredging of the seven miles will continue through this fall and into 2017.