Previously, the United States Army Corps of Engineers (USACE) was required to make flood mitigation infrastructure repairs, but if a local sponsor, such as the Papio NRD, conducted the work, then that sponsor was not eligible to have the project costs reimbursed.

The original process was costly on a variety of fronts, as following the flood of 2019, many levee systems went unrepaired for months, leaving people and infrastructure exposed to more flooding danger. The new legislation, championed by the Papio NRD, expedites emergency repairs and simultaneous federal funding on a national scale through authorizing language in the 2020 Water Resources Development Act (WRDA).

“This legislation impacts far more than just our District,” said John Winkler, general manager of the Papio NRD. “Now, local sponsors across the country can start to repair vital flood mitigation infrastructure immediately following an emergency instead of waiting for federal action or funding. Typically, sponsors can do the work in one-third the time and cost than the federal government. We cannot thank our congressional delegation enough for its hard work and support,” said Winkler.

The Papio NRD strongly advocated for this funding inclusion in both the House and Senate and worked closely with Nebraska’s congressional delegation, as well as governors from multiple states to enlist their support. Congress voted to provide $12 million for the program, which will enable USACE to begin issuance of ultra-low interest loans with very favorable terms to entities like the Papio NRD to more efficiently construct vital flood mitigation infrastructure. 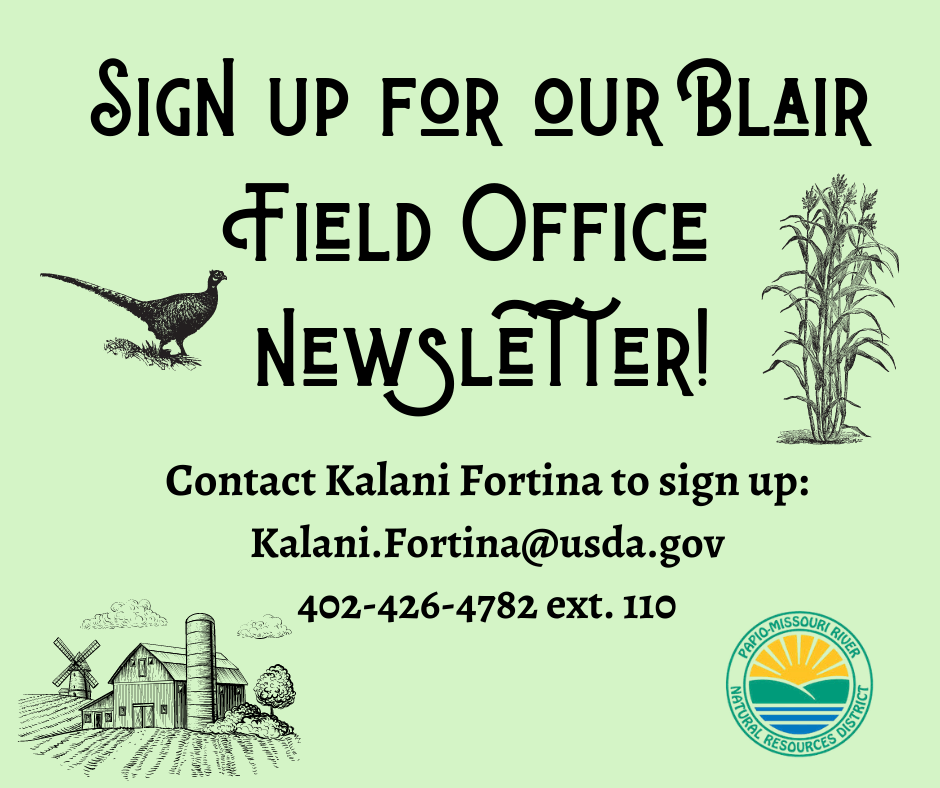 The Blair Field Office is starting a monthly newsletter! Stay in the loop on conservation programs (and much more) that benefit you, your neighbors, and your land.

See your tax dollars at work in your inbox or mailbox, whichever you prefer.